“All of the elements needed for strong theatre – excellent script and a powerful cast – are present in Antigone na h’Éireann, making it essential viewing.”
Manchester Theatre Awards

“As always with Fringe, you see things you might not normally see, where you may be challenged, taken out of your comfort zone and made to sit up and take notice.
Antigone na h’Eireann did all this and more.”
North West End

Nomination – Best Actor (Female)
for Jenny Quinn as Annie
“A refreshing, powerful production; this is a must see.”
Buxton Fringe Reviews

“Well-scripted by writer/director James Beagon, this is a sensitive and thought-provoking play.”
★★★★ – Broadway Baby 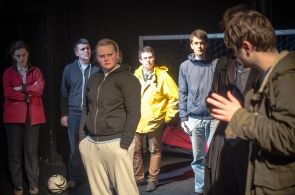 ★★★★ – The Student
“Definitely worth watching to see just how successfully Aulos Productions managed this unique and risky concept.“ 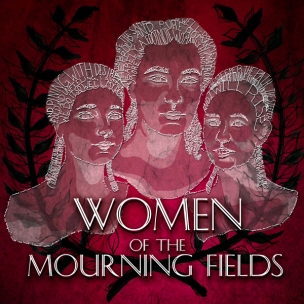 ★★★★ – All Edinburgh Theatre
“Women of the Mourning
Fields is a compelling, always entertaining piece of theatre that puts a new spin on history. Don’t miss it.” 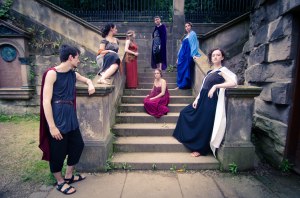 Buxton Fringe Review
“A play about telling the right story, this is a superb story itself”
“The youthful cast give an air of professional calmness in their performances.”

Feminist Festival
“All of the performances are brilliant…”
“The writing is sharp”
“This was a performance which will stay with you.”

All Edinburgh Theatre
“In terms of adaptation, Beagon has scored a pretty direct hit.”
“A pair of superb performances from Sally Pitts as Iphigenia and Danielle Farrow as Clytemnestra.”
“An entertaining piece of grassroots, student theatre.”

Mumble Theatre
“The script eloquently transported this ancient tale into the modern day and raced forward at a good pace that held the audience in the tangled web it so masterfully weaved. A great effort from a young cast full of talent and enthusiasm.”

★★★★ – Edinburgh Reporter,
“This production recently won Best New Writing at the Buxton Fringe 2014, and it’s clear to see why.”
“This is a unique, meaningful piece of drama“